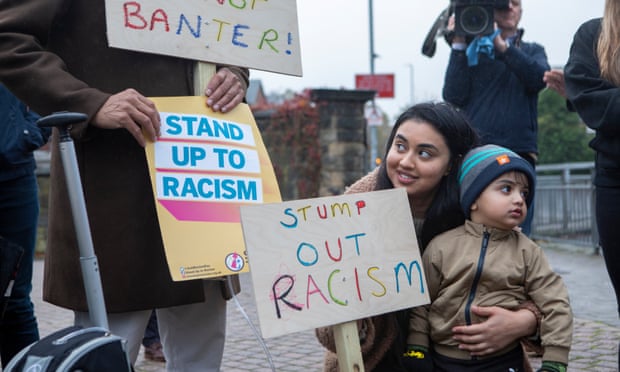 The continuing racism scandal at Yorkshire County Cricket Club intensified this weekend with protests outside the ground on Saturday and claims staff have received death threats.

The club was plunged into turmoil last week after a report carried out into a culture of racism described the use of the p-slur against former Yorkshire captain Azeem Rafiq as “banter” that, it said, warranted no further action.

A protest outside the stadium in Headingley on Saturday saw cricket fans, including Rafiq’s young son, sister and father, call for the release of Yorkshire CCC’s full report and an end to racism in cricket.

As heavy rain lashed down on the gathered protesters, Rafiq’s father held a homemade sign that read “Racism is not banter”. Addressing the crowd, Leeds University lecturer Dr Abdul-Bashid Shaikh said: “We call upon Yorkshire CCC to do the right thing and acknowledge that racism exists and it has fallen short of the standards we expect from such a prestigious club.” He called for Yorkshire to take “concrete steps” to eliminate institutional racism.

Mohammed Patel, a human rights lawyer who organised the protest, told the Observer: “Yorkshire County Cricket Club failed in their duty. No doubt about it. To drag an ex-player through everything that he has endured, to the brink of him thinking of taking his own life, there’s no excuse for that. That’s why everyone is here today.” Rafiq, who played for Yorkshire for two spells between 2008 and 2018, has said he was left feeling suicidal after his treatment by fellow players and a failure to investigate complaints of racism by the Yorkshire CCC board.

On Thursday night the England and Wales Cricket Board (ECB) suspended all internationals and other big games at Yorkshire’s ground and the club’s main sponsors withdrew their support after a public backlash.

The former England batsman Mark Ramprakash called for Yorkshire CCC to be “dragged into 2021” after what he said was a “disappointing” reaction to accusations of racism.

Ramprakash told BBC Radio 4’s Today programme on Saturday: “The attitudes of the board show … a lack of contrition and a lack of understanding of the gravity of what happened. That is what is so disappointing.” A source at the club said that extra security has now been brought in to protect staff working at the cricket ground after some of them received death threats. It is not suggested any of the protesters were involved. Staff said Friday’s Yorkshire CCC board meeting was held over Zoom, instead of in person, for security reasons and that the majority of staff have been told to work from home if possible for the foreseeable future.

The club also took down the staff directory from its website on Friday. The events come in the face of anger from cricket fans in Yorkshire over what many see as blatant attempts by the club to sweep the problem of systemic racism under the carpet.

Can NBA 2K22 MT Coins Be Converted Into Real Money